Marek Sobola, Servare et Manere Secretary-General, has initiated historical research and international cooperation which led to a significant discovery that sheds light on the history of architecture in Žilina, the fourth largest city in Slovakia. This particularly interesting discovery was the fact that the author of landscaping around the former Cloth Factory in Žilina – Ungarische Wollwaren, Militärtuch- und Deckenfabrik Actiengesellschaft in Sillein was Carl Gustav Swensson (June 15, 1861 – April 13, 1910). This Swedish landscape architect (born as Svensson, changed his surname to Swensson after arriving in Würzburg, Germany in 1881) worked mainly in the countries of the former Austro-Hungarian Monarchy. In today’s Slovakia, in 1891, he implemented a project for a park around the Cloth Factory in Žilina. To this day, old solitary trees from the original park concept can be identified in the area around the former factory, which at that time was one of the most important parks in the city not only in terms of area, but also in the use of the assortment of trees and shrubs. Unfortunately, up to date, only a fragment of this original and historically important park has been preserved. Only now do we appreciate the real significance of Swensson’s work and his contribution to European garden and landscape architecture. Swensson can be assessed as an important landscape architect with international presence; he was truly a Paneuropean architect. However, he has received appropriate attention only in recent years.

In 2021, 160 years passed since the birth of Carl Gustav Swensson and also 130 years since the establishment of the park around the Hungarian Wool Fabric, Military Clothing and Blankets Factory (German: Ungarische Wollwaren, Militärtuch- und Deckenfabrik Actiengesellschaft in Sillein). As this is so far the only confirm and also the only surviving work of this architect in the whole territory of the Slovak Republic, the Town Council in Žilina, by its resolution, approved the naming of the nameless park located near by Kysucká and Športová streets as the Carl Gustav Swensson Park. The initiative to rename the park was initiated by NGO Servare et Manere, which interpreted the results of historical research by Marek Sobola to the Town Council of Žilina. The current park also partially occupies the area of Swensson’s original conception and has been enriched with an assortment of rarer and rarer tree species, which forms a small exhibition of trees in the country. Each tree and shrub has a number, description and QR code, thanks to which the visitor learns more about a specific tree. All information, including the floor plan of the entire park, the history of the place, the history of the factory or other attractions related to Swernsson, are also located on several information panels. The overall intention is to create a space which, in addition to the possibility of relaxation and a green zone in an otherwise more industrial area of the city, will also offer historical and botanical information. Thus, a kind of the first miniature town’s botanical garden was created, where the visitor will learn information about the trees and steps planted in its area. The current renovation of the park was designed by Marek Sobola.

At the initiative of the NGO Servare et Manere, the town of Žilina decided to finance the Carl Gustav Swensson Memorial, which the NGO also built. The Memorial is located in a park with the same name and its authors are landscape architect and artist Marek Sobola and sculptor Michal Janiga. Ján Janík provided overall technical documentation and design of information panels located in the park. The Memorial project was carried out under the official auspices of the Embassy of the Kingdom of Sweden in Vienna. 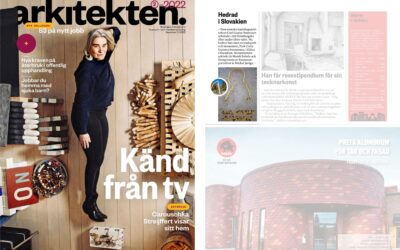 The Memorial consists of two inseparable parts: sculptural-architectural work and living planting. The 4.6 m high sculpture itself is inspired by the Gothic Gate (Slovak: Gotická brána), the most beautiful natural formation of the Súľov Rocks (Slovak: Súľovské skaly), a mountain massif near Žilina. The Memorial is based on the Gothic Gate not only in shape but also in material. The Súľov Rocks massif is made of a Súľov conglomerate, which is very similar to a concrete mixture. The green roof on the crown of the Memorial finds its species in the rocky vegetation. The green roof as a tool of contemporary landscape architecture is gaining more and more popularity in the design of buildings. In addition to its aesthetic function, it is an element that is perfectly connected with the surrounding landscape and, last but not least, this green infrastructure retains water in the landscape and is a habitat for many species of animals. This creates new habitats in an urban environment. The use of contemporary landscape tools and methods, together with classical architectural sculpture and materials, created a precondition for the creation of a modern architectural and artistic work, which fulfills not only aesthetic but also an educational function. The architecture of the Memorial connects the Cathedral of the Holy Trinity, the Craft House (Slovak: Remeselnícky dom) and the building of the former Hungarian Wool Fabric Factory.

The portrait of Carl Gustav Swensson was modeled from wire by Michal Janiga and placed on the front of the Memorial. The sculptor Janiga also created small brooches – artistic gilded jewelry, which is a miniature of the portrait on the Memorial. The use of wire is directly related to the craft of wire work, which was very widespread in the past around Žilina (Divina, Dlhé Pole, Veľké Rovné). In this way, the traditional craft was combined with modern sculptural expression and architecture.

The Memorial includes three Memorial trees – birches in the cultivar ‘Dalecarlica’ (Latin: Betula pendula ‘Dalecarlica’, Swedish: Ornäsbjörk). This tree was discovered in Sweden in 1767 and has been the Swedish national tree since 1985. Three commemorative birches were planted by rare guests of the event: Her Excellency Mrs Annika Markovic, Swedish Ambassador to Austria and Slovakia; Her Excellency Mrs Martina Balunová, Slovak Ambassador to Sweden; Mr Peter Fiabáne, Mayor of Žilina; Mr Marek Sobola; Mr Michal Janiga and landscape architect Michael Schwahn from Germany, who is Swensson’s biographer and expert on his work. On the occasion of the opening of the park, Slovenská pošta issued a green occasional postmark number PPP 67/21.

The Swedish magazine Sverigekontakt published a report on the Carl Gustav Swensson Memorial.